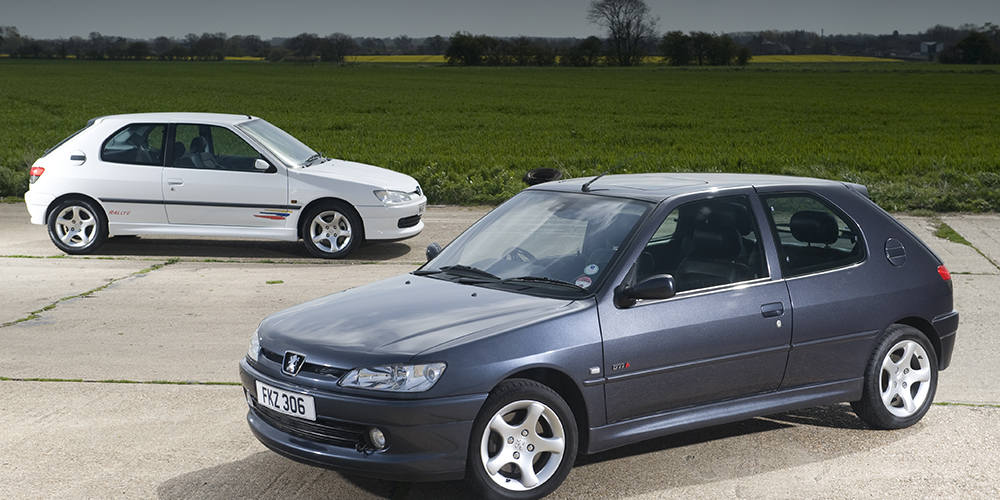 The 306 was developed between 1990 and 1992 for a launch at the beginning of 1993.  Concept versions of the 306 were first seen around the end of 1990, although the motoring press initially reported that it was going to replace the smaller 205.  However, by the end of 1991, Peugeot had confirmed that the new car was going to replace the 309, as well as some versions of the 205, which was going to remain in production for several more years, despite the launch of the entry-level 106 supermini in September 1991.

Peugeot created a D-Turbo “hot hatch” version, which was essentially a petrol XS model with the diesel unit installed.  It was a popular seller in all its various phases throughout the life of the car.  Most D-Turbo cars were 3 door models, but there are a few rare examples of the 5-door D-Turbo.  The D-Turbo and XS variants were fitted as standard with front fog lights, body-coloured bumpers with deeper spoilers, sports seats and different steering wheel, and a wider, chromed exhaust tailpipe; 14-inch alloy wheels were an optional extra.  The models fitted somewhere between the XR and XT variants in terms of standard equipment.

The XSi 8v 2.0 Petrol had the addition of subtle side skirts.  15-inch five spoke alloy wheels were available as an option when the model was launched, and became standard shortly after.  The S16 (for ‘soupape-16′, or ’16-valve’) was a 3-door Phase 1-only model, replaced with the more powerful GTI-6 in 1996.  The engines in both cars were 16-valve XU-series units with Magnetti Marelli fuel injection and produced excellent power and torque outputs for the time.  As well as gaining a close-ratio 6-speed gearbox over the S16’s 5-speed, the GTI-6 had more power courtesy of a reworked 167bhp XU10J4RS engine replacing the S16’s 155bhp XU10J4, ACAV, and some subtle chassis revisions.  As well as being more powerful, the GTI-6 engine had more flexible power delivery with more mid-range torque than that in the S16, and the new gearbox made it easier to use the engine more effectively.  The GTI-6 was introduced as a Phase 1 model and was to last until the end of 2000.  It received Phase 2 and 3 cosmetic and electrical updates alongside the rest of the range, but the engine and mechanical specification remained largely unchanged.

The 306 underwent the only major revamp of its life in May 1997, with the launch of the “Phase 2” version (N5 in Australia).  The basic shape remained the same, but lights, grille and bumpers were redesigned in an effort to bring the styling into line with the new, more rounded, Peugeot family look established with the Peugeot 406.  Indicator lamps were now incorporated into the headlamp unit and the new style “block filled” Peugeot lion logo was adopted.  The Phase 2 also saw the addition of an estate version.

A new-style typeface for the car’s model number was adopted on the tailgate, removing the black plastic backing.  There were also some changes to the dashboard layout, including a digital odometer, and trim quality which freshened up the car in the face of increasingly stiff competition from other manufacturers.  New engines were also offered, with both 1.8 and 2.0 petrol engines gaining 16-valve cylinder heads together with modest power increases.  At this time, the previous trim designations were replaced by L, LX & GLX for the UK market.  XS, XSi and GTI-6 models continued as before, but with the Phase 2 headlight, grille, bumper and other cosmetic updates alongside the rest of the range.

Cars from 1998 onwards (1999 model year) received further enhancements, including an aluminium-effect centre console on certain versions and a chrome Peugeot logo on the steering wheel.  Other updates included removal of the black strip on the boot lid, colour-coded bumpers on some models and new upholstery in the cabin.

New models also appeared in Phase 2 trim.  Sold only in the UK, the Rallye was launched in 1998 using the mechanicals from the GTI-6, but with less standard equipment (manual windows and mirrors, no air-con, Rallye-specific cloth instead of leather and alcantara, front spot lights removed), making it 65kg (143lb) lighter than the GTI-6.  Sold at a discounted price of £15,995 (over £2000 less than a GTI-6), it only came in four colours – black, Cherry Red and Bianca White and one only in Dragoon Blue – and there were only 501 produced.  As the production of the Rallye straddled the Phase 2 and 3 models, some Rallyes had superficial Phase 3 features such as the flush glass tailgate and slightly different bonnet, but remained fundamentally a Phase 2 model in such characteristics as the fuse box and electrical layout.  The UK Rallye is different from the 2001 Australian market N5 Rallye, which was based on the 5-door XT model.  In 1998 Peugeot has launched SP version – denotes sport pack, there have 3 different levels of equipment.  The Meridian model (originally a special edition) was also relaunched in 1999 and boasted a generous equipment list including new half-leather seats, and further cosmetic upgrades to the interior.

Models from mid-1999 saw further improvements and exterior modifications, including clear lenses on the headlamps, round and clear lensed fog lamps, complete colour-coding of the exterior trim, removal of the black plastic strip on the lower edge of the tailgate, flush glass seal to rear windscreen, a redesigned tailgate rear badge, different rear wiper and new paint colours.  Interior upgrades were more minor, with the gear knob becoming rounder and silver topped, while the instrument binnacle received a silver background and white instrument needles in place of the previous red versions.

XSi, XT and D Turbo models all received the GTi-6’s body kit and interior styling additions but not the cyclone alloy wheels.  In the diesel variants, the ageing XUD engine was replaced by the newer, HDi engine, which featured common rail injection.  Some base models made use of the DW8 normally aspirated diesel engine.  Almost all models included ABS and multiple airbags as standard equipment.  Rain sensitive automatic windscreen wipers were also standard on all but the base spec.