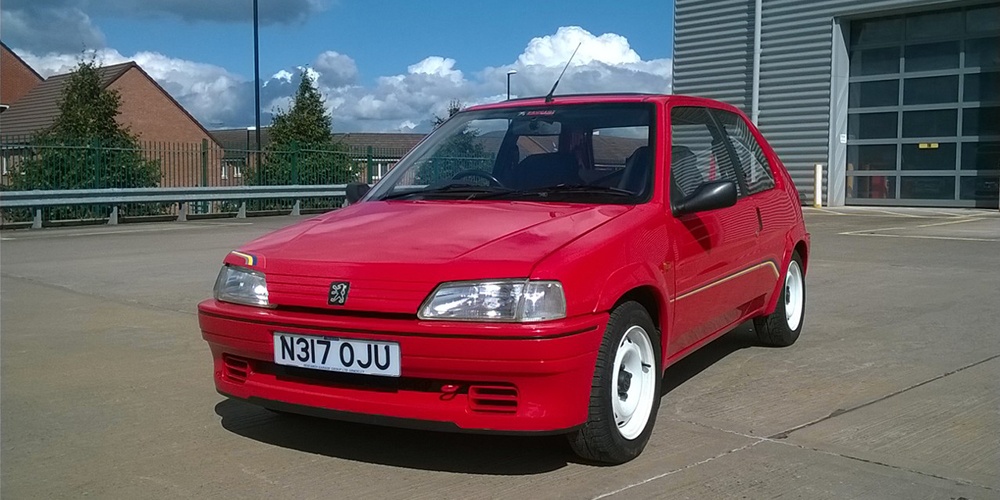 The Peugeot 106 is a city car produced between 1991 and 2003.  Launched in September 1991, it was Peugeot’s entry level offering throughout its production life, and was initially sold only as a three door hatchback, with a five door hatchback joining the range in the beginning of 1992.  Production ended in July 2003.  For the first year of production, the 1.0 and 1.1 petrol engines came with a carburettor, but were replaced by fuel injected engines from the end of 1992, as a result of EEC emissions regulations.

The “10” line of Peugeot superminis had commenced in 1972 with the launch of the 104, one of the first modern European superminis.  The 104 was effectively replaced by the Peugeot 205 in 1983, but remained in production for some markets until 1988.  The 106 was introduced as a three door hatchback in continental Europe in September 1991, and two months later in the United Kingdom.  The initial engine range had 1.0, 1.1 and 1.4 petrol engines, as well as a 1.5 diesel.

The early 1.0 and 1.1s were carburetted, but were replaced with fuel injection after a year due to EC emissions requirements.  The 106’s successor, the Peugeot 107, along with rebadged versions, Citroen C1 and Toyota Aygo, was launched two years later in June 2005, as a joint venture with Toyota.

It was updated in July 1996, with changes including the introduction of side impact bars and availability of driver and passenger airbags for the first time, with the new 1.6 GTI joining the range as the spiritual successor to the hugely popular and highly regarded 205 GTI, which had been discontinued in 1994.  In January 1996, the Peugeot 106 also formed the basis for the near identical looks and size Citroën Saxo.

Marketed as having “fewer frills, more thrills”, the Rallye version had trademark steel wheels painted white.  Power steering, central locking, and electric windows were omitted to keep the weight down to 825 kilograms.  There were pre and post facelift versions of the 106 Rallye known to enthusiasts as S1 and S2 models, with the latter having a 103bhp 1.6 litre (TU5J2) engine in place of the original high revving Rallye specific 1.3 100bhp (TU2J2) engine fitted to pre facelift cars.

Both the S1 and S2 models were fuel injected, employing Magneti Marelli multi point fuel injection systems.  The S1 Rallye was designed as a homologation special to compete in the 1300cc rally class.  It featured a four cylinder, 8 valve, high compression engine with an aggressive cam profile designed to come ‘on song’ between 5400 and the 7200rpm redline.

This engine coupled to a short ratio five speed gearbox made the 1.3 more of a sprinter than a cruiser. 70mph on the motorway was a noisy 4,000rpm in fifth gear, but if you had enough tarmac, the little 1.3 would redline in top gear at 115mph.  The 106 was competitive in racing, but also made a practical small family car.  All cars had steel wheels, and Rallye decals and seat coverings featuring a three colour flash, which again varied between early and late cars.